A blog detailing our collection of Peter Powell kites, and chronicling our flying of these kites. Plus a bit of PP kite history thrown in. Our collection to date can be seen here. I am keen to expand the collection, so if you have an old Peter Powell kite, whether made in the UK or the US, gathering dust and looking for a new home, why not get in touch? Depending on the kite (does it bring something new or different to my collection?), its condition (is it flyable? how much TLC does it need?), and the price you ask (+ shipping if from outside the UK), we may well be able to do a deal.

For several reasons, covid not being the least of them, the 2021 version of the PPKOG kite didn't arrive until January 2022. 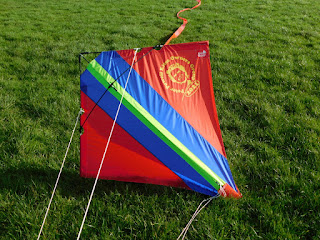 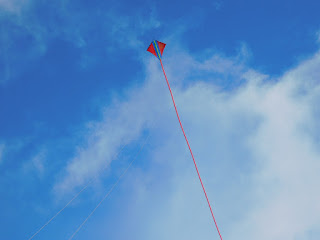 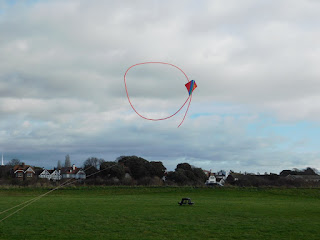 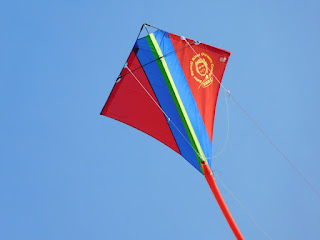 And this time, there was the opportunity to get this cool hoodie as well! 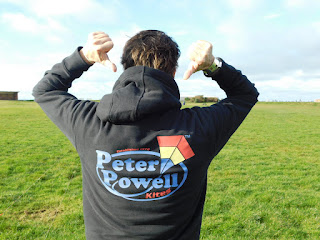 Posted by flyingfish at 00:21 No comments:

One new, one old

Been really quiet on the Peter Powell blog front, simply because there hasn't been any addition to the collection since March this year. But that has now changed, as I've been able to add not one, but two Peter Powell Stunters to it!

For health reasons, a dear friend of mine had to give up his kite collection, with many of his kites ending up with me. And among those were two Peter Powell Stunters, a Mk III and a Mk I. We went out to fly them yesterday, in a blustery 6-16mph wind. 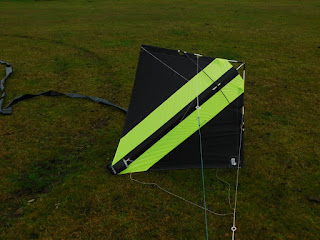 It flew really well in the prevailing wind. 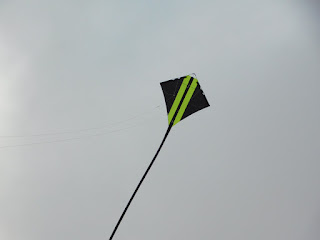 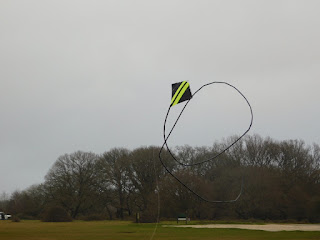 The Mk I is an unusual one: it has a green polythene sail. Have seen plenty with black, yellow, blue or red sails, and I have all those in my collection, but I have never come across a Mk I with a green sail. 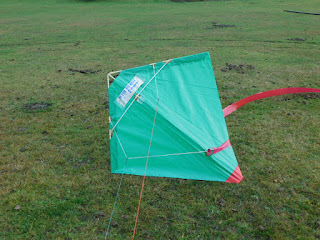 It struggled a bit to climb when the wind dropped, but once flying, it performed well. 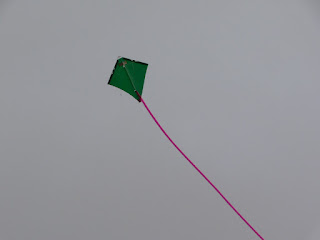 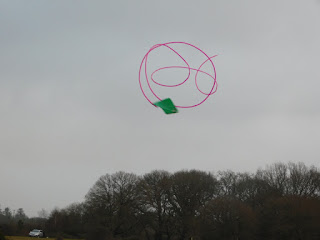 Of course, we had to fly the two together; would be rude not to! 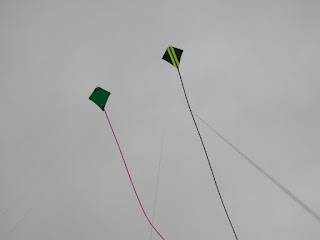 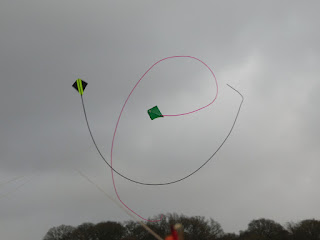 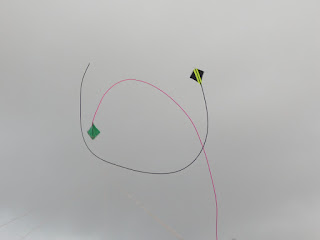 What become clear when flying the Mk I and Mk III side-by-side is that the Mk III steered much better. But it was nice to see a new and old Peter Powell Stunter in the air together!
Posted by flyingfish at 09:14 No comments:

And then there were two ...

Couple of years ago, I managed to get my hands on a Junior Stunter, a rather unusual Peter Powell kite. Never saw one before, and never seen one since, so it appears to be a pretty rare kite, quite possibly because it was never produced in large numbers.

Having this blog public does have its advantages, because I got an email last month, asking me if I knew someone who was interested in a PP Junior Stunter .... Uhm, yes, me please!

Given the current lockdown, we are limited to the outdoor sports field down the road, but fortunately they're large enough to fly our second Junior on 30m lines. 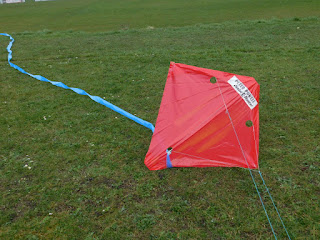 Like the first one we got, this PP Junior clearly feels nimbler on the lines. 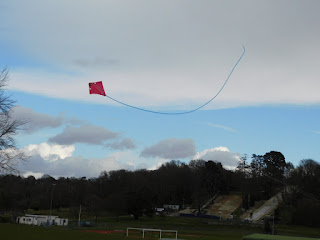 And as we have two now, we wouldn't be Flying Fish if we didn't fly them together, would we? 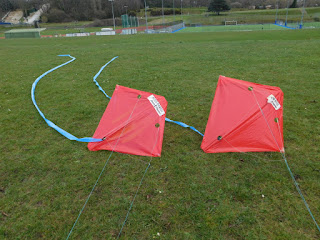 Because they're a bit more twitchy than a full-size PP, they weren't as easy to fly together, but flying them together we did! 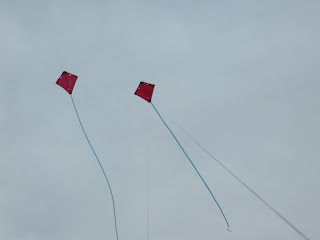 Posted by flyingfish at 07:30 No comments:

It's been really quiet on the Peter Powell front this year, for several reasons, and it's been quite a while since I've been able to add to the collection. One of the reasons for that is of course that, as the collection grows, there are fewer and fewer 'new' kites to add.

But there is one now! Following the PPKOG kite introduced last year, Paul was persuaded to create a '2020' version, in a different colour scheme. So here it is! 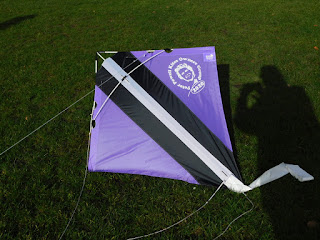 Of course, the weekend after I received my PPKOG 2020 kite (#1, as before), the wind had died completely, but I'm pleased to say we have now given it a proper inaugural flight. 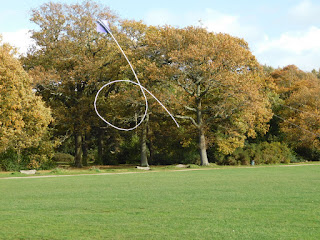 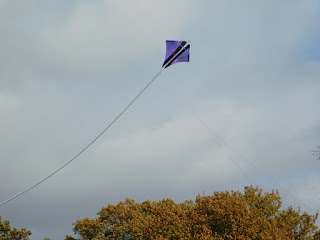 Maybe the start of an annual tradition?
By the way, I just realised this is the 100th post in this blog!

Posted by flyingfish at 06:59 No comments:

The Skyraker was the first dual-line delta produced by the US arm of Peter Powell Kites. It came in several verisons: 1-panel, 3-panel, 11-panel and with 'Illusion' graphics (plus, it appears, a Jolly Roger version). Although I did get manage to get my hands on a  3-panel, and 11-panel Skyraker, clearly my Peter Powell collection would never be complete without a Skyraker 'Illusion' ...

Took me quite a while, but I did manage to find one! 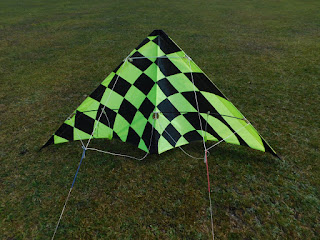 Like the other Skyrakers, this 'Illusion' version needs a decent breeze to fly well; 12mph at least. When the wind drops away, and at the edge of the wind window, it struggles, especially in turning. 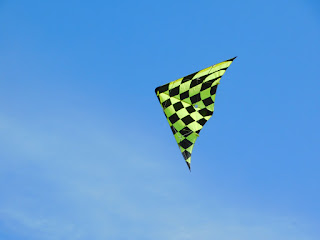 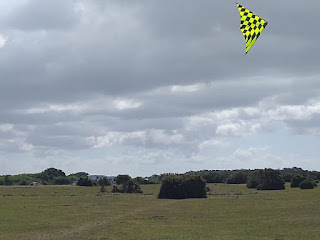 Yet another bag for the PP collection

As I predicted some time ago, the gradually growing collection of PP kites requires a further bag expansion. The American-produced kites already had their own bag, separate from the UK-produced ones, but with the recent addition of the Cayman 6-stack to the collection, it just doesn't fit anymore ... Solution? Yet another HQ Proline bag, again from Kiteworld, and this time in red. 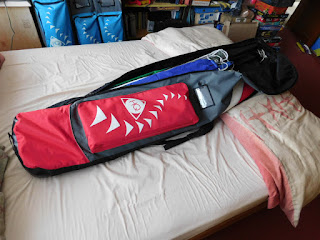 All the Caribbean Kite Company kites now live in this new red bag.
Posted by flyingfish at 02:28 No comments:

When the US arm of Peter Powell Kites became independent under the name Caribbean Kite Company, it kept a small number of PP kite designs and simply renamed them: the basic PP Stunter became the Cayman, the Skychaser became the Tobago, the Skylite became the Mustique, and the Omni quad-kite became the Caicos. Even though the Omni sail pattern was changed, it basically remained the same kite under a different name.

Of course, I'd been looking for a Caicos to add to the collection ... did you expect anything else? 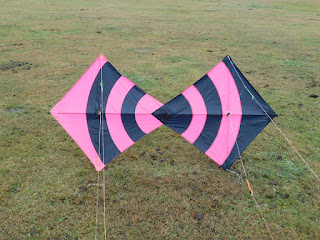 My experience with the Omni wasn't that positive, so how does the Caicos fly? Did CKC make any subtle changes to the bridle to make it a bit less twitchy? 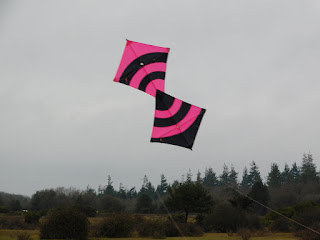 Errrm, no .... it flies exactly the same as the Omni: quite twitchy and difficult to keep it stable. Of course, that may say something about my ability to fly a quad, but I have far less problems with other quad kites, such as the PP Double D, and I flew Omni and Double D side by side under the same conditions ....

No matter how twitchy it is, I'm happy to have added a Caicos to the still-growing collection of Peter Powell kites (#63, if anyone is interested).

Posted by flyingfish at 10:09 No comments:

Click the logo to go to the Peter Powell web-site, where you can buy your own Mk III Stunter